The new controller features 5 I2C sockets for your peripherals, a stronger USB-B socket for durability, and peripheral flashing mode – no need for FTDI232 USB-UART board any more!

Just plug your device into 1st socket of the master, flip the mode switch to “P”, press the reset button (“R”), and flash it! Flip back to “F” to fly or update the master software.

The device is still stackable if you want some insane number of peripherals, the v2b version will be the regular one without flashing capability, meant for use as secondary controllers.

Look for the assembly/operating manual in the wiki!

Something cool has happened this weekend!

While updating the AB412 head code to work with XTrident 412 in Xplane I decided to rewrite it in a better way, and then inspiration kicked in and I have made a few important changes in the firmware structure =)

END_OF_DOCUMENT_TOKEN_TO_BE_REPLACED

I have just rolled out an important software update, that includes some cool new features:

Addition of support for single MKIII collective lever along with the Huey-style head means that most of MKIII users can now try upgrading to MKIV version! And the latter two features is why they probably should.

The idea of EMA filtering and sample rate reduction was offered by our DIY community member, Pablo Castro, quite a while ago. Sadly I could only try it today, and results turned out to be great! While controls were already very smooth, now they are even more precise, yet filtering doesn’t add noticeable input lag.

Note that for the new version to compile, you will need to remove old ADS1115 library from your IDE and install the new one from z_libraries folder in simchair4_software repo. That library is a fork by soligen2010 that allows ADS sample rate tuning.

If you are upgrading from MKIII version, please don’t forget to select your devices in device_definitions tab manually.

A few good things happened in the last few days.

We now have quite a detailed documentation with photos for: 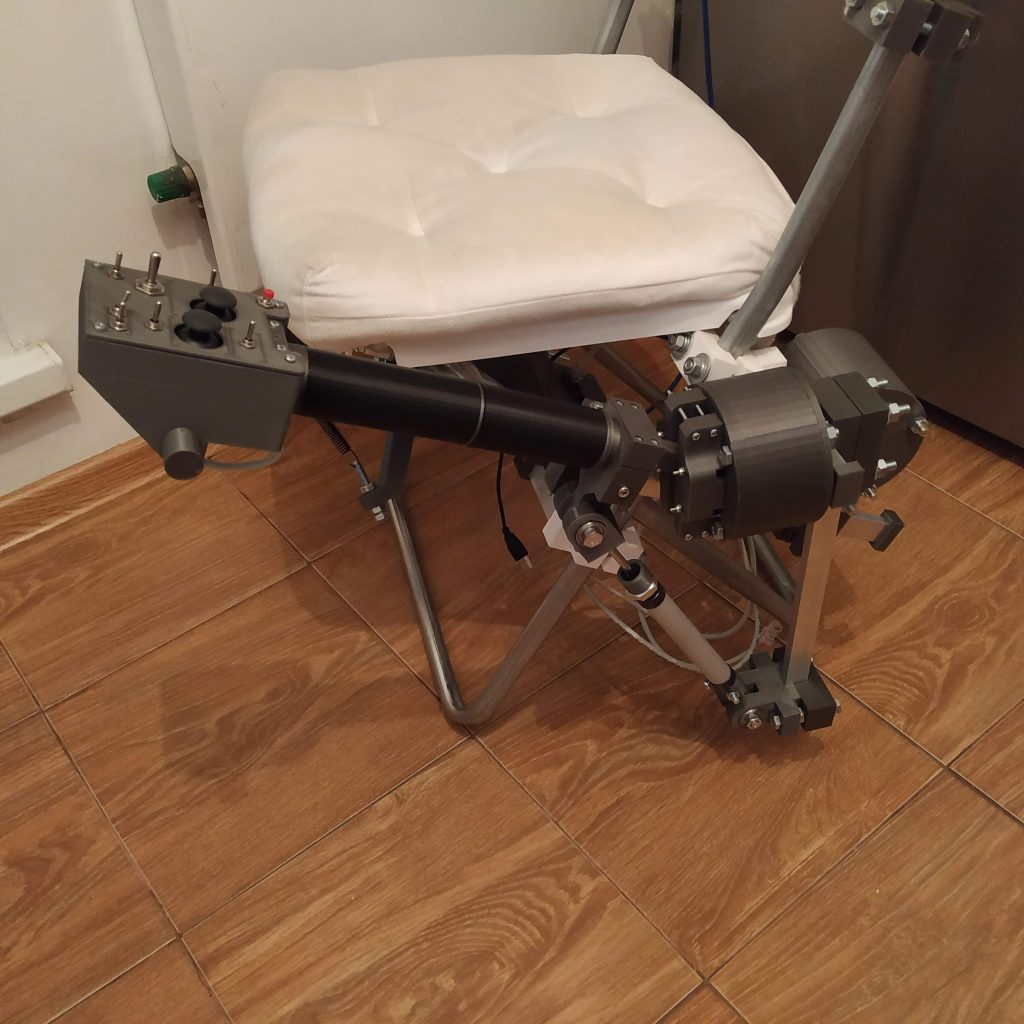 It’s been a long time since I added the XTrident 412 startup and shutdown support (for some weird reason it doesn’t have key assignments for starter and idle stop buttons) by request of my friends and I’ve been pretty much concentrating on polishing the hardware lately. I never liked that script, as it was pretty glitchy and written in an anal way, and it may have possibly been eating up some hard – earned FPS. But finally, I’ve gotten some time to read the docs and came up with a much cleaner script, that just adds a few entries to XPlane’s controls menu. It works perfectly and does not disable starter and idle stop switches from sending joystick button presses, unlike the old one, so you can use them when flying something else, and that’s cool =)

To the new script, install FlyWithLua plugin, and put the script under XPlane11\Resources\plugins\FlyWithLua\Scripts folder. Start the sim, and you will find new key assignments for XTrident 412 under Simchair MKIII/412 tab. However, you will notice that there are 3 keys for each switch: left, right, and middle positions. That’s where 412 head’s special switch modes come in handy!

You can either get the latest master controller firmware from GitHub, or make the following changes in switches configuration for the 412 head:

For those of us who want to try flying in VR, but can not afford to buy a 1080ti + Oculus Rift right now, there’s a decent alternative! I’ve recently bought a 6″ Xiaomi Mi A2 smartphone (not just for VR, my previous phone have died), and of course, I decided to give it a try in my BoboVRZ4 headset.  This is a pretty average smartphone, quite an inexpensive one. Yet, the cool thing about it is, it has a nice and crisp 2160×1080 screen (which is good enough be able to read instruments in VR!).

Last time I’ve tried to use my phone as a VR headset, I used Nvidia Moonlight to stream my PC screen to it. This was rather painful because stuff like lens distortion correction needed to be done on the PC (usually with help of Reshade), and if the game didn’t support native split-screen VR mode, additional software was needed.

Now, there’s a far better option: iVRy software, that turns a phone into a Steam VR headset! It works, FPS is decent, everything is quite smooth. Lens distortion compensation is done on the phone automatically according to your headset profile. The cool thing is, this setup runs XPlane just fine on my humble  GTX970 (FXAA, High effects, Maximum objects, High textures) at around 30 FPS, which is rather comfortable.

I often see “Nah, a smartphone will make you nauseous” posts on the forums. Well, I’ve been flying with a flat screen and an ED tracker for quite a while and kinda got used to using my head as a joystick. If you will be using your head movements to provide a proper control input to turn your virtual head in the sim, rather than to notice and measure latency, there shouldn’t be any problems at all =)

3D mouse cursor works just fine in XPlane and can be shown/hidden with a joystick button.

Now, there are probably two most important things we need to fly:  maps/ charts, and xsquawkbox support in VR. For maps, the best plugin I have found so far is AviTab – it doesn’t cause noticeable FPS drop. You can assign a hotkey to show/hide it when needed. Sadly, Xsquawkbox does not support VR yet. There’s a Lua script for reading messages though. It seems a bit buggy to me and also requires FS economy (but you can comment out everything related to it so it will work without it).

Overall, its a very interesting experience. Flying in mountains with Ortho4XP in VR is really epic! The headset runs at decent FPS, and probably feels something like 70% as good as Rift, for a mere fraction of its price. It’s definitely worth trying!

I have installed the same clutch pedal springs from LADA 2101 to pedals and made a short test flight of the upgraded hardware in X-Plane.

WOW, THAT NEW FORCE TRIM MODE IS AWESOME, SO ARE THE SPRINGS (like that, boldly, in caps)! Springs have actually added precision and made flying really comfortable. This short flight in a 407 probably felt like the best flight in it ever.

It really changes everything. I’ve been able to remove hands from the controls and pour myself some coke while flying the helicopter with pedals only.

I will need a couple of weeks to test mechanical strength of things, and if nothing breaks, will definitely recommend everyone to try a setup with springs!

A short video of landing:

I have finally been able to go to the local car parts shop and buy some springs for the gimbal. Here’s how it looks now:

I should start by saying it works just great. These springs are from some Lada’s clutch (i think they’re for the pedal), they are 55mm long when compressed and about 11mm wide. I am pretty sure any similar spring will work great, just pick one with light or moderate tension.

More (a lot more) below!

END_OF_DOCUMENT_TOKEN_TO_BE_REPLACED

I have printed the quadrant, its parts seem to fit together quite well. I have also added firmware for it, for now, it supports 3 axes (3 more can be added easily).

Each slider has a reverse mode, programmed as a separate axis, so we can fly STOL aircraft =) This is the first version of the software, more features will follow. Let me know if you have ideas of useful functions for it!

I really like flying helicopters, but sometimes I just want to take that Cessna 172 for a ride. Sometimes, I like flying TF-51 in DCS.  Sometimes I fly STOL aircraft, and I know some of my friends love flying jets.

I have made a single prop GA control panel with three axes earlier, but that one only has 3 axes, and most of the times I am too lazy to go fetch it from the shelf and mount to the table. That’s why I decided to make something universal, that will fit the standard IKEA GUNDE chair frame, somewhere on top of the collective lever base. I want it to be connected and active simultaneously with other stuff at all times (I think we all can find a good use for some additional axes).

I also want it to be modular (stackable, from 1 to 6 axes, for now, tell me if you need more!), and I want full reverse support (there’s a problem with it usually). I don’t think it needs to resemble any particular aircraft, so it can stay universal =)

It uses all of the standard potentiometer’s 300-degree travel range. Forty degrees of travel is reserved for reverse operation (various types of reverse will be supported in software), then there’s a small gap with a tactile detent, and the rest of its travel is used for main axes. I will start printing it soon and release it after I  check that parts fit together properly.